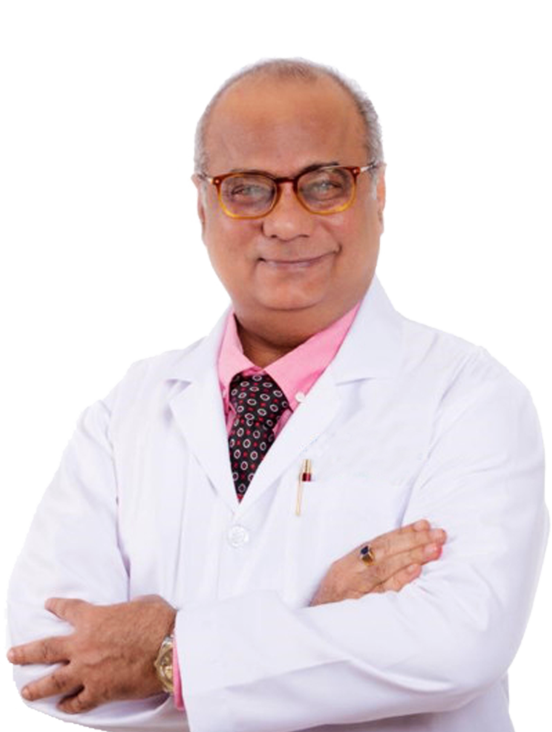 Dr. Arun Kumar Sharma is a Consulting Neurologist with over 30 years’ experience. He has published several research papers in the most widely-read and peer-reviewed world class Neurology journals on his own original research work like “Effects of Protein-energy Malnutrition on the Nervous System”, ”Shy-Drager Syndrome-Parkinson's Plus Syndrome”, as well as on the common neurological disorders like Diabetic Peripheral Neuropathy, Multiple Sclerosis, Alzheimer's Disease, and many more. His work on the deleterious effects of malnutrition on the nervous system was awarded a PhD in neurosciences by the Post Graduate Institute of Medical Education and Reasearch. The original publication distilled out of this research oeuvre is regarded as the most widely cited research work, and remains at the top of Google's search list even 30 years after its appearance in the official journal of the World Federation of Neurology, "Journal of Neurosciences".

In recognition of his scholarly reputation he was invited to co-author a widely-read textbook, " Neurological Disorders in Internal Medicine”, published by Springer-Verlag, New York, USA. Propelled by his academic avidity and enthusiasm for dissemination of knowledge, Dr.Arun Sharma has delivered over a hundred original papers as well as CME lectures on a wide array of topics in various international conferences and national forums. He was awarded the E. Merck Gold Medal for the best original research paper on “Shy-Drager Syndrome” at the World Congress of Neurology held in Montreal, Canada. In addition to being a widely-acclaimed academic as well as an astute clinical neurologist, Dr. Arun Sharma is also trained and certified in Neuro-electrophysiology from Nicolet Inc. Madison, Wisconsin, USA.

Dr. Arun Sharma is credited with the epoch-making honour of founding the Department of Neurology and setting up the state-of-the-art Neuro-electrophysiology Laboratory at one of the oldest and most reputed healthcare institutions in the UAE, Al Zahra Hospital, Sharjah and Al Zahra Medical Centre, Sheikh Zayed Road, Dubai, way back in the year 1997, at a time when the field of Neurology was still in its nascent stage in the UAE. He was invited by the then health minister of UAE and the Chairman of Al Zahra Hospitals Group to start the much-needed service of Neurology in the private sector. Until then, psychiatrists and internists were called upon to serve patients with neurology disorders. Moving forward, he successfully replicated the same pioneering feat at Emirates Hospital, Dubai in the year 2016, and the Emirates Hospital Healthcare Group, Dubai in February 2019.

Over 3 Decades of Experience

Dr. Arun Sharma obtained, with distinction and many scholarly awards, a Master’s degree in Internal Medicine, Post-Doctoral degree DM (Neurology), and (Neurosciences), from the pre-eminent and arguably the most prestigious medical university in India, the Post-Graduate Institute of Medical Education and Research (PGIMER),Chandigarh. The curriculum of PGIMER, Chandigarh is designed on the lines of and derived in totality from the Harvard Medical School. This iconic institution is affiliated with Massachussets General Hospital, Harvard University for the structuring of clinical pathways and protocols. In the year 1990, Dr. Arun Sharma was appointed to the highly coveted post of Assistant Professor and Consultant-in-Charge of Critical Care and Emergency Ward at the universally renowned PGIMER, Chandigarh, India. He was awarded an Overseas Doctors' Teaching Scholarship to train at th National Hospital of Nervous Diseases, University College London, Queen Square, London, UK. The latter stint afforded him the rare opportunity of being awarded the prestigious Fellowhip of Royal Medicine (UK). Later, he obtained a Diploma in Neuro-electrophysiology from the University Of Winsconsin, Madison, USA. In the year 1997, Dr. Arun Sharma was invited by the then health minister of UAE and member of the Sharjah ruling family Sheikh Faisal bin Khalid al Qassimi to establish and head the department of Neurology at Al Zahra Group of Hospitals and Clinics. Later, Dr. Arun Sharma served as the Head of Neurology and Clinical Director at Emirates Hospital, Dubai from 2016-2019. That was followed by appointment as Medical Director and Head of Neurology at Emirates Hospital Clinic, Conrad Tower, Sheikh Zayed Road, Dubai.

Dr. Arun Sharma is the best Neurologist in Dubai.

If you Have Any Questions Schedule an Appointment